Agriculture is an important economic driver for the province of Ontario. In 2016, more than 13 million metric tonnes of barley, corn, oats, soybeans, and wheat were produced on six million acres of land. This helped to generate $9 billion in economic output and more than 40,000 jobs in the province.

Understanding the end-use markets for Ontario barley, corn, oats, soybeans, and wheat is critical for the viability of the industry. It is also a key component in the development of new market opportunities for Ontario farmers.

The Ontario grain and oilseed industry is very complex in nature due to the size of the province, the wide range of transportation options, the interprovincial transfers of grains for certain export markets, the increased use of on-farm storage, and the movement of western Canadian grain through Ontario ports. As a result, understanding the current utilization of crops can be challenging.

This comprehensive report works to identify key markets, uses, and opportunities that will help position Ontario grain ans oilseeds in a manner that ensures the best opportunities are being provided for Grain Farmers of Ontario’s farmer-members.

Barley production in Ontario is relatively small compared to other parts of Canada. on average, 186,000 metric tonnes are produced on 148,00 acres each year which represents 2% of the country’s production levels. A slightly downward trend in production has been occurring over the last five years. Alberta and Saskatchewan are the leading barley producing provinces, producing on average 90% of the barley grown in Canada. Globally, the primary barley producing regions are the European Union followed by Russia.

Virtually all of the barley produced in Ontario is used for domestic purposes. Animal feed is the main market utilizing 77% of the harvest – mainly for beef and dairy cattle. Food for human consumption and pet food are two other important markets with 18% of production going into these markets. Food for human consumption includes de-hulled, pearled, toasted, and barley flakes. There is a small percentage used for seed (4%) and a very small volume (<1%) that is exported.

Ontario farmers grow barley on a smaller scale than other grains. However, one industry that offers opportunities for growth is malt barley for craft breweries. While this industry is still being developed in the province and currently does not utilize a large volume of the crop, it represents value-added and niche market opportunities for Ontario farmers. 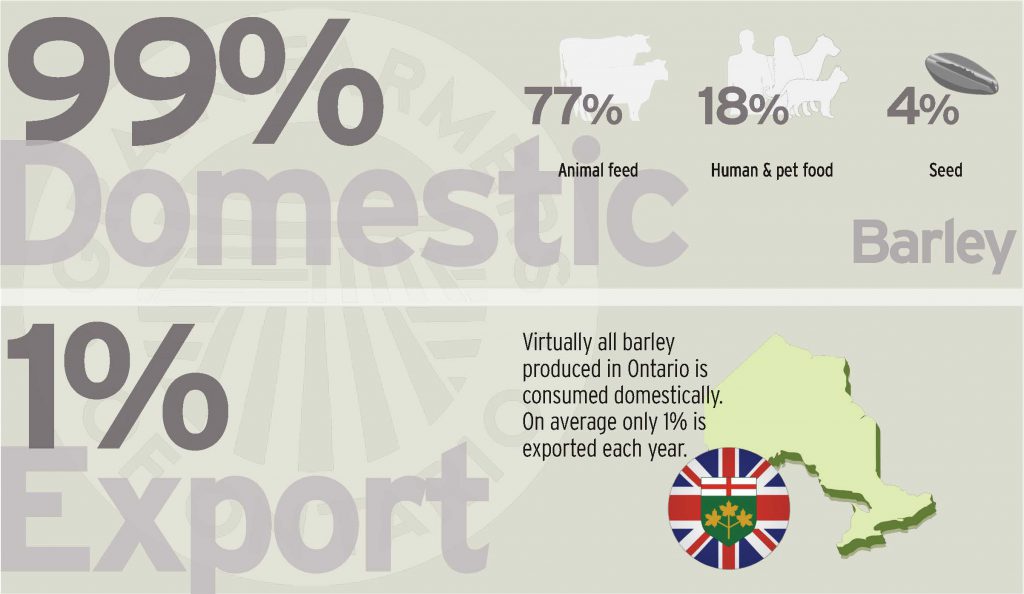 In terms of global production, Canada is a minor player: producing only 1% of the global corn supply. Global production is driven by the United States, China, and South America.

Grain corn is the second largest crop in terms of acreage in Ontario, but it is the largest volume crop – farmers produce on average between 7.5-9 million metric tonnes a year on 2 million acres. Ontario is the leading corn producing province in the country – growing, on average, 63% of Canada’s grain corn.

In terms of global production, Canada is a minor player: producing only 1% of the global corn supply. Global production is driven by the United States, China, and South America.

Over 90% of the corn produce din Ontario is used domestically. Animal feed is the main market, at 45%. Swine and beef cattle are the main users of corn for animal feed. When the by-products of processing are included, such as Dried Distillers Grains (DDGs), total feed consumption is as high as 54% of all corn grown in the province.

Ontario corn exports have been steadily increasing over the past number of years and with increased production continuing to occur year over year, exports present a growth opportunity for corn. Major export markets include the United States, Spain, the Republic of Ireland, and the Netherlands. 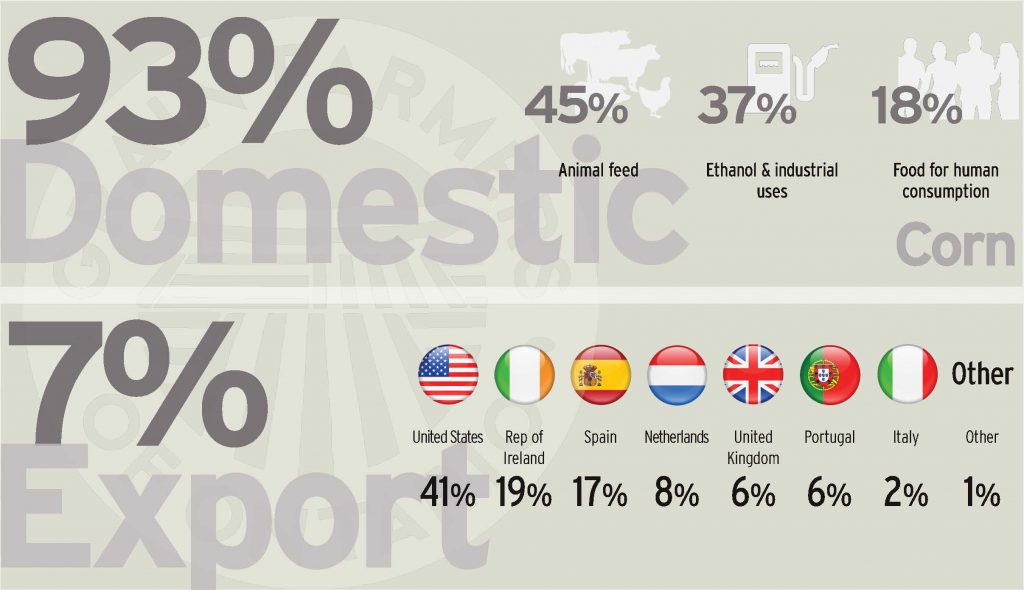 Ontario oat production is relatively small compared to other grain commodities grown in Ontario. Production levels have remained fairly stable at around 63,000 metric tonnes on 75,000 acres for the past six years.

The vast majority of oat production in Canada is on the Prairies, led by Saskatchewan with over 50% of total Canadian production. Globally, Canada is the third largest producer of oats, behind the European Union and Russia.

Domestic usage makes up the largest market for Ontario oats, utilizing 79% of total production. Food for human consumption is the largest segment making up 60% of total domestic use. Most of these oats are used to produce oat flakes and flours used in cereals and cereal bars. The majority of these oats are produced in Northern Ontario. The Climatic conditions in Northern Ontario produce a higher quality oat more suitable for the milling industry.

Total animal feed use makes up 33% of domestic usage. The horse feed market is the largest segment of this representing over two-thirds of all feed usage. Horse feed is a premium market for Ontario oats but has declined recently. The remaining animal feed is used primarily on-farm for beef and dairy calves.

Ontario exports 21% of its production. The main export market is the United States where the oats are primarily used for animal feed. 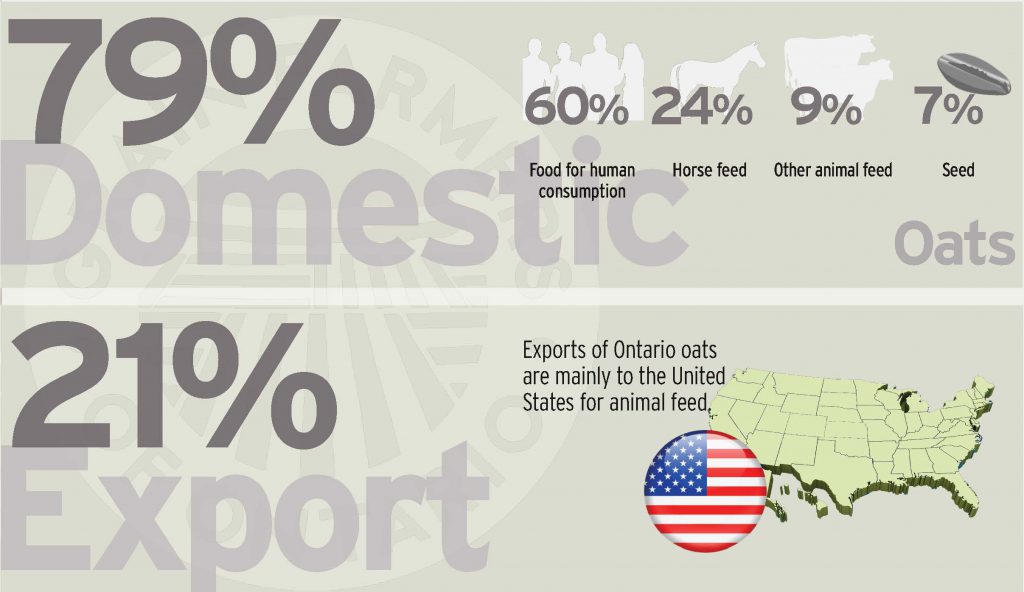 In terms of global production, Canada is a minor player, producing less than 2% of the global supply. Global production is driven by the United States and South America.

Unlike barley, corn, oats, and wheat, the majority of Ontario soybeans are exported. With 59% of Ontario’s soybeans destined for international markets, every three in five rows of soybeans leave the province.

Commodity soybeans make up 76% of total soybean exports with key markets being China, the European Union, and the United States. Food-grade soybeans make up 24% of exports and are destined for mostly Asian countries including Japan, Malaysia, and Vietnam. Food-grade soybeans are used in a variety of different soy food applications including tofu, miso, natto, and soy beverages. 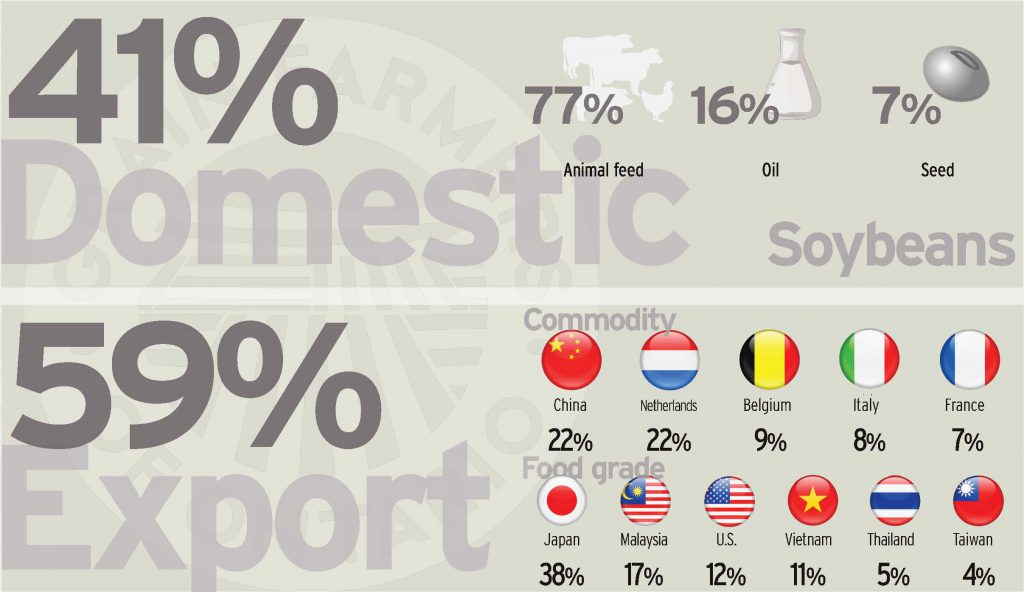 Wheat is the third largest field crop in Ontario behind soybeans and corn. Each year, Ontario produces, on average, 1-2 million metric tonnes of wheat on 600,000-1 million acres. Ontario is diverse in its wheat production, growing two different categories, winter and spring wheat, along with several different classes in each, including soft red winter, soft white winter, hard red winter, and hard red spring.

Ontario acreage accounts for 4% of harvested wheat acres in Canada but 7% of total production. This is due to the higher yields seen in Ontario vs. Western Canada. Ontario is also the leading producer of winter wheat, growing on average 57% of Canada’s total production of this category.

The majority of Ontario wheat it utilized domestically with 57% going primarily into food or feed uses. Of domestic utilization, 46% goes into domestic milling, with 40% going into animal feed. Swine and poultry consume the highest amount of wheat in feed rations. total feed use also includes wheat shorts from milling and mill feed from Western Canadian wheat that has been milled in Ontario.

Ontario exports a significant amount (43%) of its total wheat production; 30% goes into Quebec for milling and feed purposes. The United States takes 35% of exports with the remaining going to international markets. While Quebec is not considered an export market for the purposes of this report, out of province shipments were included as exports.

Wheat exports and domestic feed use of wheat varies widely from year to year and is based on the quality of the crop and pricing. A significant portion of Western Canadian wheat is also shipped to Ontario for milling due to the significant milling capacity within the province and the close proximity to customers. 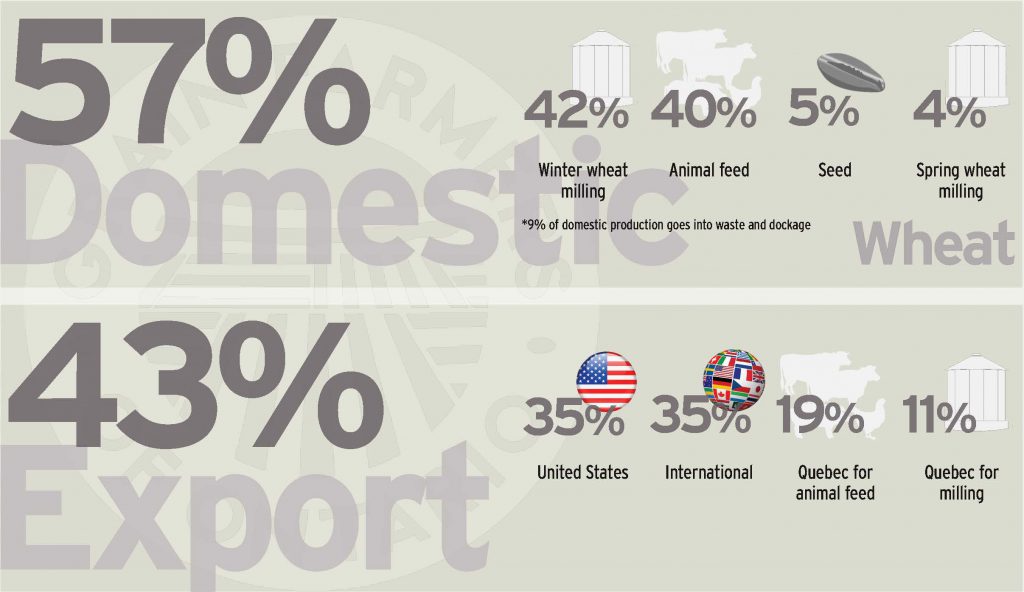 This report was developed for Grain Farmers of Ontario by Synthesis Agri-Food Network.

Although there is a wide range of information available through Statistics Canada and the Ontario Ministry of Agriculture, Food and Rural Affairs (OMAFRA) some important market segments such as domestic grain usage and on-farm usage data is not available through these sources. As a result, interviews with industry experts across the value chain were used to gain insight into current grain utilization, shipping patterns, and trends in Ontario. These included grain handlers/traders, grain buyers/processors, and representatives from the seed industry and the feed industry.